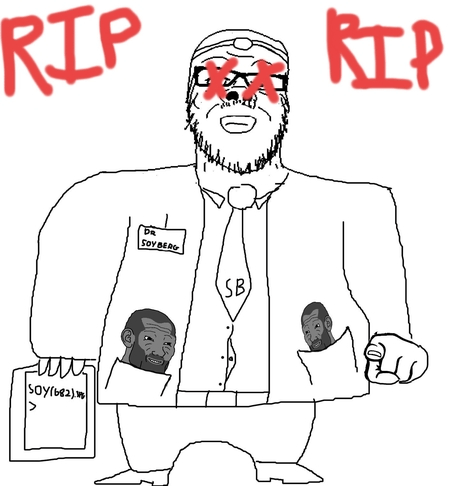 soyjak.party, also known as The Party, and countless other names; and also also accessible via basedjak.party, is an imageboard primarily dedicated to datamining. It was first launched on September 19th, 2020 by Soot in order to commemorate the 44th anniversary of the crash of Turkish Airlines Flight 452. The party has 17 boards, which is way too many, but the majority of its activity is on the soyjak board /soy/, which usually gets multiple posts every hour. – Wiki

An independent competitor to 8chan, styled 8chan.moe, that was created in 2020 as a home for dispossessed imageboard communities from around the Internet. It has no affiliation with 8kun or that site’s owners, but offers features similar to the original 8chan such as user-created boards and volunteer-managed communities. The site adheres to free-speech principles, although with a much stronger emphasis on prohibiting illegal content than the original 8chan had. Popular boards include:

8chan.moe utilizes a powerful, dedicated server running Stephen Lynx’s LynxChan imageboard software, which the site staff have played an active role in developing features for since 2020. The site possesses the most advanced frontend of any website using LynxChan, and the staff have developed several other open-source tools and novel concepts around the site, including distributed administration, custom caching solutions, streaming sites, imageboard database importers and converters, Tor-based video hosting, Tor-network proxies, and custom-coded anti-spam and anti-DDoS protective measures for the benefit of all anons who post there.

The backup domain is located at 8chan.se. .cc is a third fallback. TOR access can be found here, or you can access the TOR portal from the clearnet at Redchannit 2.0

ComfyChan, (formerly Classichan) provides the classic 4chan experience. Comfychab was born in early may this year when a couple anons were talking about making a new altchan. People missed the 4chan of old, and were getting tired of shadowy mods and politics/coomers on modern 4chan. It got too serious for something that started as a little anime website.

Comfychan is an altchan where politics and pron are banned, where posts are removed and people are temp banned instead of perma banned (because smaller community=more manageable), and which has a far more pleasant and interesting community reminiscent of an older era of 4chan, when it was just anime girls insulting everyone instead of some political/horny [crap]hole. It has an approach of quantity<quality when it comes to community building, so it doesn’t try to have a bigger community than 4chan, but instead a better one

9chan is an anonymous imageboard that promotes ideas over identity. We provide the best tools to host and manage an imageboard community. You must be 18 years or older to visit this site. This site is actively moderated by our team of volunteers around the clock.

9chan allows users to create their own imageboard on the site.

Epitto is a super secret community, where the whole site is handmade, the development is never stopped, and user opinion and preference are really heard. We want to make an honest social media platform where the topics themselves are the center of discussion, not the people discussing them. We are ready to take up the challenge to create unique spaces for the discerning ladies and gentlemen.

So, leave your top hat on the rack, but do not forget to whip out your monocle – it’s compulsory. Then, pick a channel, the Epitto cabybara is eager to guide you to the pond. 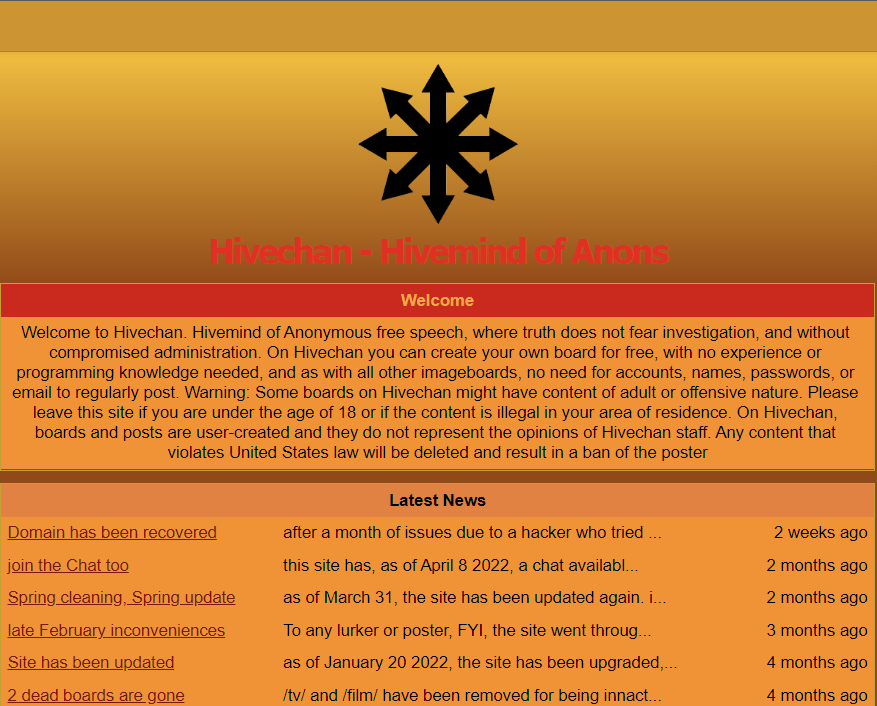 Hivemind of Anonymous free speech, where truth does not fear investigation, and without compromised administration. On Hivechan.com you can create your own board for free, with no experience or programming knowledge needed, and as with all other imageboards, no need for accounts, names, passwords, or email to regularly post.

It’s most important board, is the /sig/ one, tied to the /sig/up community of Telegram, which is lead by the owner of https://sigup.net, a site dedicated to self-improvement, hence the name sig, which comes from Self Improvement General threads that used to be on 4chan. Originally, sigup had its own imageboard called sigchan which was linked on AllChans, but it was shut down. Hive will have a board to serve as the new home of /sig/ anons, primarily those from sigchan. It is a place for anyone to make a board, in particular political ones. 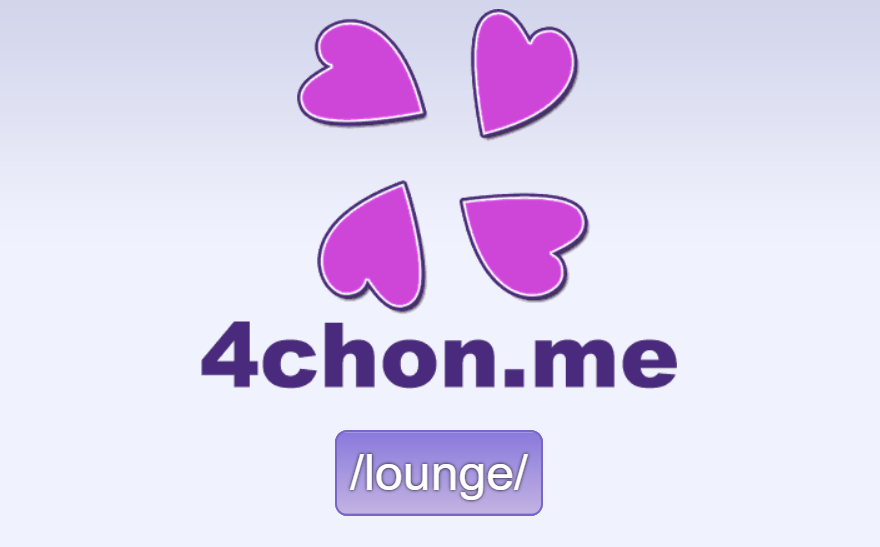 Founded by SaveTheInternet (STI), 4chon is the remnants of an imageboard community, now administered by HDV, that’s existed throughout various domains on the web. It is now an active single board image board. The site originated from 4chon.net where the tinyboard software came from (which is what vichan forked from and most board owners are using now). There is more history information at: wikibooks.org/wiki/4chan_Chronicle/4chon

Currently only one board is listed /lounge/ 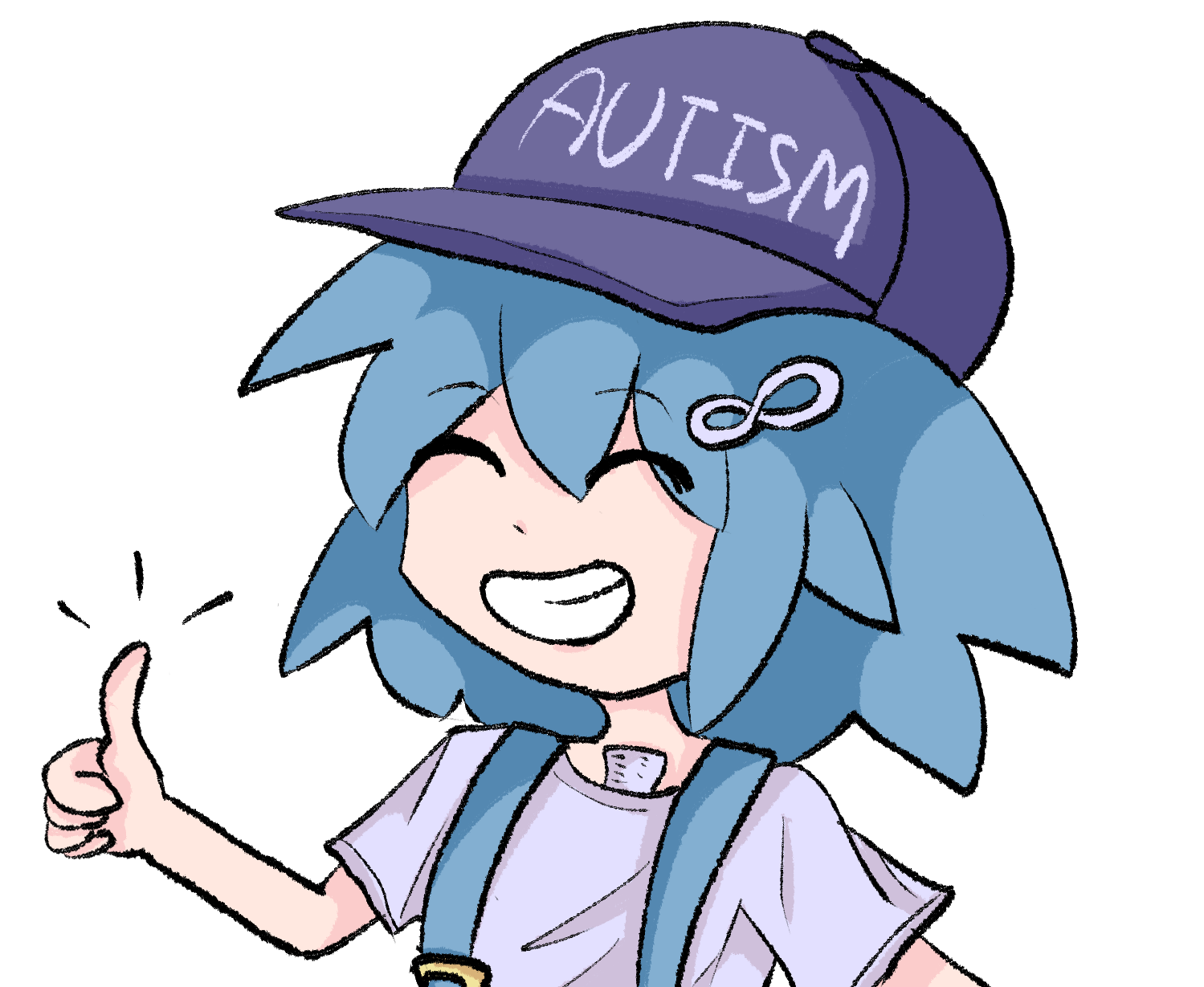 Aspiechan is an imageboard for people who suffer from “Autism” “Depression” “Anxiety” and other neuroses may be discussed in >>>/sperg/; all else goes in >>>/b/ 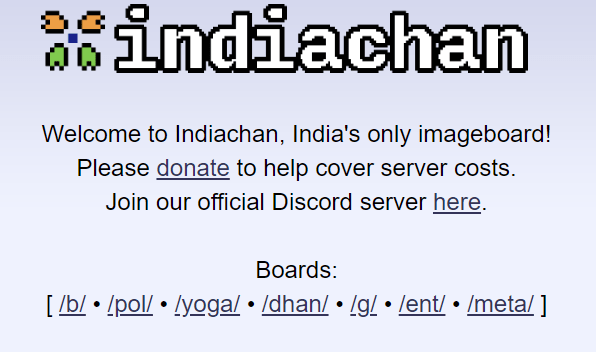 *I put no effort into verifying the claim. 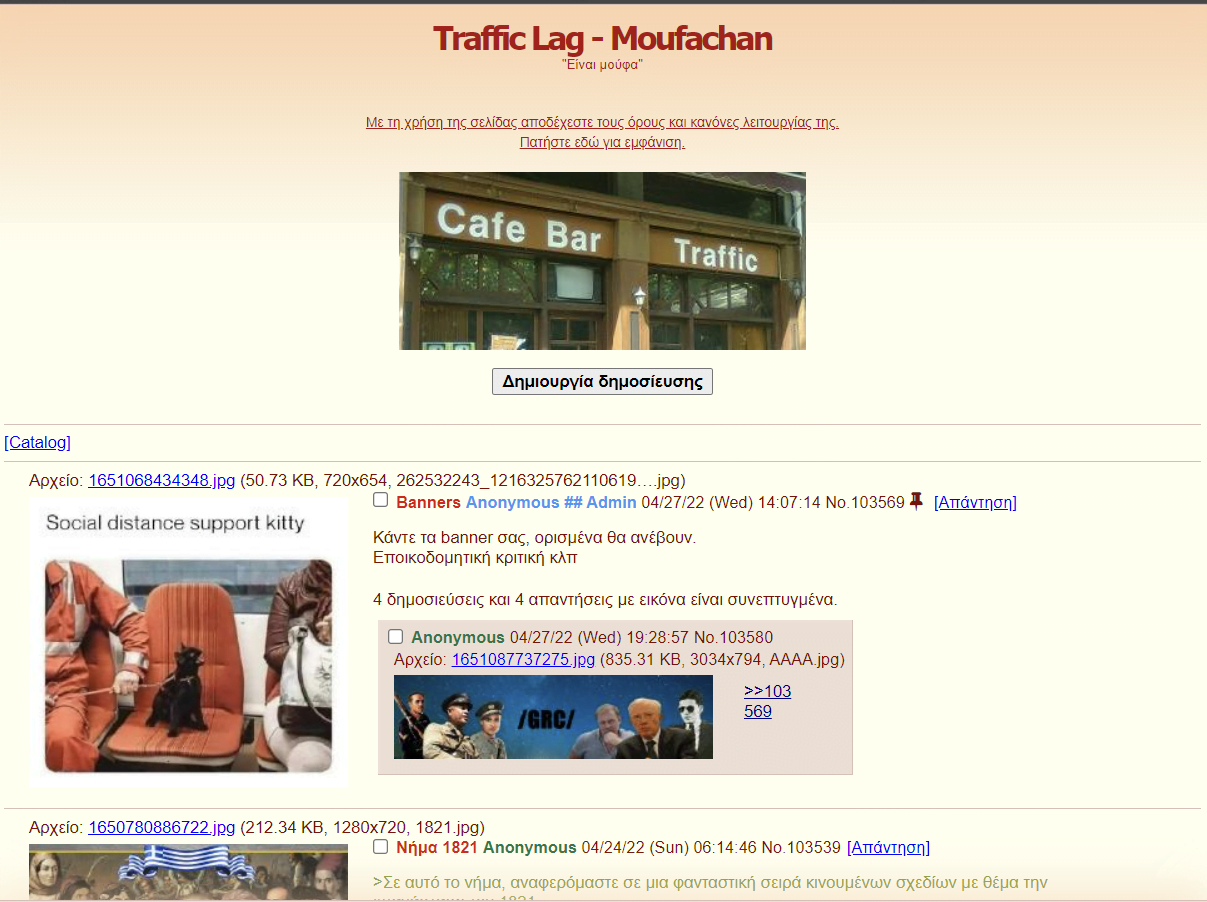 Traffic Lag has been listed on here a while, but someone submitted some more information on the site.

Traffic Lag is a Greek message board created in 2008 and has been active since. It was redesigned recently and now only has 1 board /b/. The site has a cult userbase in Greece, but the site seems to convert to English well with google translate.

Add the AllChans button to your website to support us! Use this code to display the above button on your site